Welcome to Part 4 of Distributed Thinking! Here we discuss processing data streams. In case you missed anything, click here for Part 0.

I’m glad you survived so far! Now let’s get down to processing things using technologies designed to process them, instead of relying on plain old Java Threads.

In the previous post, I discussed how to write a Word Count program using a threadpool in Java. Let’s quickly map that program into Storm and see how things work.

Let me start off with a brief introduction to Storm. Storm started off as Twitter Storm, a technology to process the massive amounts of streaming Tweets that were pouring into Twitter.

I first used Twitter to actually process batches of data for a TV viewership product. Lots of lessons were learnt. Now it’s Apache Storm, and I know what it’s best used for. Our word counting problem isn’t exactly a “data stream” problem, but we can see how Storm can still help us bring up a distributed system to process the data anyway.

The major components of Storm can be explained with the image below: 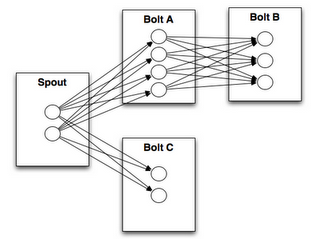 You can map this to the current system as follows:

As Storm is designed to process continuous streams of data, it provides ways to retry processing of an object in the stream, but does not have an easy way to stop the system once it’s started.

A Storm system is started and made to process data streams continuously without stopping.

Let’s look at how we’d map our Word Count problem in Storm and solve it:

The code consists of the following components:

Here we kill the topology after a few seconds of execution, with the assumption that all the bolts are done processing the data left inside them. However it is important to note that it’s difficult to have a deterministic way to stop Storm as it’s not designed to be stopped after being started except when someone’s absolutely sure that they don’t want to process any more data.

I will discuss an elaborate strategy to make Storm a little more deterministic later.